When Detours are Part of the Journey

24 Nov When Detours are Part of the Journey 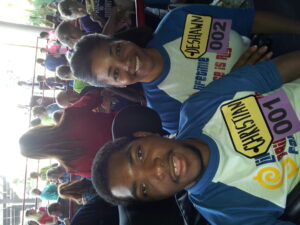 Allen Saunders once wrote “Life is what happens to us while we are making other plans.” In 1992, other plans for DeShawn Hale included graduating from Indiana University where she was studying on an academic scholarship and soon to be venturing out on a new career. But when she became pregnant in her senior year and her child was born three months prematurely, her dreams, aspirations and career were put on indefinite hold.

Her son Christian was born with what would later be diagnosed as Cerebral Palsy and Failure to Thrive. He spent his first three months in the hospital followed by years of doctor’s visits, specialists and therapists. At three years old he experienced “aggressive” seizures. His disabilities demanded continuous care. Unable to walk and non-verbal, it became apparent that Christian would need complete care, meaning assistance for all activities for the rest of his life. As DeShawn explained, “I realized at twenty years old I had to be an adult. My parents have always been very supportive and I tried to finish school, but Christian came first. I had to get a job and take back control of my life.”

As a single parent caring for a child with disabilities, DeShawn’s new plan was to make it possible for Christian, despite his limitations, to experience as much in life as possible. Those experiences included baseball, travel, Special Olympics, horseback riding, bowling and even zip-lining. Christian eventually graduated from Arlington High School, went to the prom and crossed the stage for his diploma. DeShawn then surprised Christian with a trip to California to be part of the audience of his favorite TV game show, The Price is Right. But as Christian reached the age of twenty-one, DeShawn faced another challenge: finding daytime services that would provide an environment where Christian could continue to engage and grow as an adult.

“I visited several adult day-care facilities,” recalls DeShawn, “but could not find one that I thought was the right fit. Then we were referred to New Hope. When we met with the people there, I just knew. I could see how much everyone truly cared, feel the love they have in their hearts. And it’s genuine. I felt good about taking Christian there. I knew he was safe and cared for. And I was confident it was a place where he would thrive.”

Over the years Christian has come to think of New Hope as his second home and his second family, making it extremely difficult during the Covid-19 pandemic. “Our routine was completely thrown off.” says DeShawn, “Plus it was difficult to communicate to him why he couldn’t go. Christian needs social interaction and while I did a variety of things to keep him engaged at home, it was very frustrating. The best day ever was when we were able to go back to New Hope. Christian communicates with his body and you could just see him light up with excitement when we pulled into the entry.”

“New Hope has been the most awesome experience for both Christian and me,” DeShawn states without hesitation. “It has been a God send, giving Christian an outlet in life. They nurture him both physically and emotionally. He definitely has grown in his independence there.” For DeShawn, having the peace of mind knowing her son is safe and happy has created some new-found independence for her, as well. She recently graduated from Indiana University with a degree in Business and is currently studying toward becoming a CPA. It’s perhaps a little later than planned, but as DeShawn poignantly states, “There’s a reason they call it New Hope.”