We need your help! 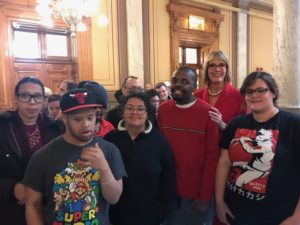 Increasing wages for New Hope’s Direct Support Professionals (DSPs) is always at the top of the legislative priority list. This year is no different. We came into this legislative session hoping to get an increase which would allow the average hourly wage for DSPs to be $15 an hour. We were told early by the legislature that this was too high, so the ask is down to $13 per hour on average. This still requires an investment of over $20 million from the Indiana General Assembly each year of the two-year biannual budget.

Unfortunately, the first half of the legislative session has ended and there is no DSP wage increase in the budget, which is very disappointing. However, a session at the Indiana General Assembly is much like a professional basketball game where much of the real action happens in the second half, with the last couple of minutes being the most crucial time. So, we have a long way to go! The legislative session does not end until the end of April, so there is still plenty of time to get things done! 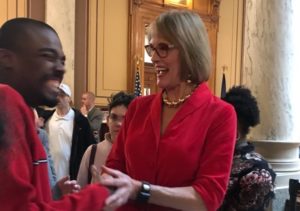 Thank you to everyone who has participated in the Voter Voice program. Voter Voice is an easy way to participate in grassroots advocacy for this important cause. If you are not participating, you can sign up here.

Thank you also to many of the individuals we serve and their staff for taking Valentines to the statehouse on February 14th including AIM and Aktion Club. As you can see from the pictures, a great time was had by all! A special thanks to Lt. Governor Suzanne Crouch who lead the 1102 Task Force, a year-long discussion regarding the future of disability services in our state.

Many of the recommendations from this task force that do not require money (all money has to be in the budget bill HB 1001) are now in HB 1488, including:

HB 1488 is still alive and will now move to the Senate for discussion and vote. Be sure to sign up for Voter Voice and stay up to date on HB 1488 and other legislative issues that affect New Hope and those we serve.