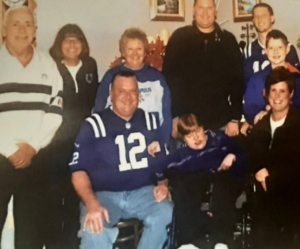 For a majority of her life, Courtney, who was diagnosed with Cerebral Palsy as a child, was cared for by her dad, stepmom and grandparents. Her dad Rick knew that as he and his parents aged, he needed a long-term plan for Courtney’s care. A friend told him about New Hope and after checking out the residential program, Rick knew Courtney could get better care from those who are trained to do so. He also liked that she could attend Day Services and be more active. However, moving Courtney into her new home brought concerns. Rick was understandably anxious about turning over her care to others outside of her family. “I was worried. She can’t really communicate so I was concerned that she couldn’t tell her caregivers that she was hungry. Or that she needed a bath.” But he quickly realized that her caregiving team was on top of things. While Courtney doesn’t say much, her happiness is evident through her laughter and smiles.