The Most Famous Singer at New Hope

26 Mar The Most Famous Singer at New Hope 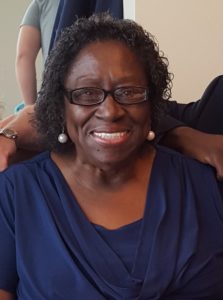 In my nearly 5 years of being a Music Therapist at New Hope I’ve had the privilege of working with so many of our clients and have witnessed a wide variety of amazing passions and musical abilities. This has included some individuals quickly learning how to read and play music on the piano (something that takes most people years to master) as well as several clients who enjoy writing their own songs and then recording them. Each individual I’ve worked with has been memorable and influential in their own way, but one person in particular has stuck out: Blanchy Young.

One of the first referrals I received when I started working at New Hope was for Blanchy. I was told she had a love of Southern Gospel music and had recorded a couple of her own albums several years before. When meeting with Blanchy the first time, I could immediately tell she was a passionate singer who expressed herself best through song. Blanchy’s love of music began at an early age growing up in Mississippi when her family would go to church revivals. Worshiping through song was a staple of those revivals and this form of self-expression has become second nature to her. In many ways, singing can be an easier form of self-expression than plain speech.

Together Blanchy and I have recorded two albums, with two more in production. Blanchy is one of the best self-promoters around and if you’ve run into her in the hallway you know she’ll do her best to sell one of her albums to you. Helping Blanchy learn and record some of her favorite songs has by far been one of my most memorable experiences at New Hope and has really shown that creativity and self-expression through music is extremely important to all of those we serve. While Blanchy’s knowledge of Gospel music is certainly expansive, there are many songs where she might only know the words to the chorus. Through our Music Therapy sessions and album recordings Blanchy is learning full songs with multiple verses, expanding her “music library” even more! Music provides Blanchy the opportunity to remain positive and to engage in a constructive form of self-expression.

I think that Blanchy remains one of my most influential clients in part because of her sizeable song repertoire, but mostly because of her intense passion for singing. The joy it brings her when we finish an album and she has the opportunity to share her songs with friends and loved ones. It brings her such happiness and pride to be a “recording artist,” and her musical reputation within New Hope has made her one of our most famous singers. You can see her wish New Hope a Happy Birthday on our Facebook page!