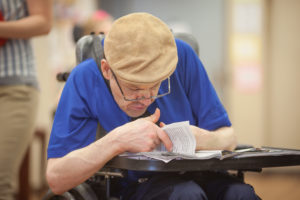 Every month, Bill McCreary looks forward to visiting his father in an assisted living facility. He checks the calendar and knows exactly when he’ll get to see his father next. Nearly 30 years ago, New Hope Team Leader Gail Mehrlich started serving Bill and eventually organized these monthly dinners. Today, it is the dedicated staff of Justin Group Home that ensure that Bill gets to see his family each month.

But this month, and for the foreseeable future, Bill won’t get to visit his dad.

Bill is deaf and communicates using limited, basic sign language. Last week he was obviously upset and kept pointing to the calendar. There was no date set for his usual visit. Gail tried to explain to him that he can’t leave his house to visit his father right now, but she reminded him that they would visit as soon as possible, perhaps in a couple of months.

Confused and upset, Bill signed to her, “Mom. Died.” And then, “Dad. Died.” Gail reassured Bill and explained that while Bill’s mom passed away years ago, his dad was still living and he would see him again soon. Bill was still distraught and spent a lot of time crying. Gail became determined to find a way for Bill to see his dad. She called the assisted living facility where his father lives and tried to arrange a video call. Bill’s brother did the same, and eventually, days later, one of the assisted living associates contacted Gail. 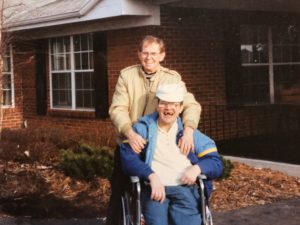 Neither she nor Gail knew much about video calling technology, but together, they figured out how to connect Bill and his father over a Facebook Messenger video call.

He saw his dad’s face and began to cry. He tried to hug the phone and kept signing to him, “I love you!” He’d never been happier to see his father.

Don’t forget to stay connected to your loved ones during this strange time, even if it takes you a while to learn how to video call. It’s worth it.

Special thanks to Gail Mehrlich, the DSPs at Justin Group Home and the rest of #TeamNewHope for their amazing dedication to serving our clients!