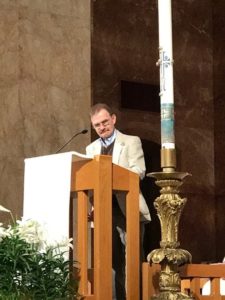 John Lorton, who is served in Supported Living and resides in the Washington Blvd. home has been appointed to the Mayor’s Advisory Council on Disabilities in Indianapolis. He was nominated to serve by current INARF President/CEO, and former New Hope Executive Director, Steve Cook. John is honored to be a council member and will provide a unique perspective as a person who sustained a brain injury in his teens and has tackled many challenges throughout his adult life with courage, strength, faith and a witty sense of humor.

John has been a volunteer at St. Vincent DePaul for the past ten years. He feels his time there is an obligation. He is involved in the New Hope SPRED (Special Religious Education) group through St. Monica’s Catholic Church. In August he will be attending the SPRED retreat, which he looks forward to every year. He also really enjoys music, especially classic rock and roll, and attends our music therapy program. Additionally, he likes to write poetry and reflections about his life, with many included in New Hope newsletters and publications throughout the years.

Good luck to John in this new and important role.