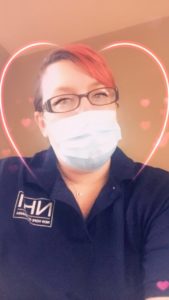 Penny Laster, like so many of our frontline caregivers, is one of the hardest workers you’ll ever meet. Often working 60-hour weeks, Penny spends more time with her New Hope family than her own most weeks. Why does she do it? Because she loves her job. Penny has been a Direct Support Professional (DSP) for about 10 years, the last two of which have been spent at New Hope. Her favorite part of the job is caring for the individuals she serves and being a part of a dedicated team of other like-minded caregivers.

During the COVID-19 crisis, New Hope has asked so much from our DSPs and other caregivers including asking for volunteers to work with COVID+ individuals. Penny was one of the first to volunteer. Since the crisis began, she has served in three different homes which have been affected by COVID-19. She says it’s not much different than her usual work aside from the addition of extra cleaning and PPE.

The biggest difference that Penny has seen is the level of stress that the individuals served are experiencing. The sense of isolation that comes with quarantine and other precautions brings a lot of anxiety and uncertainty to those we serve as it would for anyone. To help alleviate some of that stress, Penny and her coworkers are doing everything they can to keep them connected to their friends and families and to lift their spirits. She’s found that just sitting in the backyard, taking in some sun has a great effect on those who have been confined to their homes or even their bedrooms.

While the isolation takes its toll on those we serve, Penny says that she isn’t feeling alone at all. She is finding new camaraderie with coworkers that she doesn’t usually work with. She is finding new friendship along the way and is proud to be a part of #TeamNewHope. Penny says that good teamwork makes a huge difference, especially in handling a crisis. Being able to share the burden of the job with others and to work towards a common goal is incredibly fulfilling to Penny. When she feels stressed out, she takes a moment to herself to just breath, and she knows that her team will cover for her while she does so. 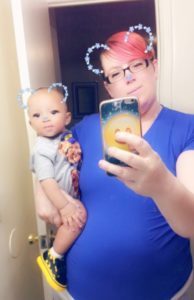 Even when Penny isn’t at work, she doesn’t stop giving back to others. She raised four children who are grown now, two of whom are also New Hope DSPs, and she spends time caring for her grandchildren at home. She is looking forward to getting back to her usual routine and can’t wait to take some time off work once the worst has passed. Until then, she is dedicated to caring for New Hope’s individuals, even those with the biggest needs.

Penny is too quick to tell you that she isn’t special. We disagree though. She is a part of a team of caregivers providing essential care to some of our most vulnerable neighbors. It certainly takes someone special to do her job, and we are so thankful for all our dedicated caregivers like Penny doing the hard work to support others. THANK YOU #TEAMNEWHOPE!