Posted at 20:35h in New Hope Stories, Service Spotlight, The Year of Creativity by New Hope 0 Comments
1 Like
Share 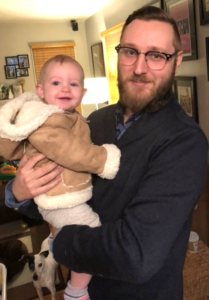 Nearly five years ago, a friend of Patrick Mitchell’s, who was also a New Hope associate, encouraged Patrick to apply for a position in New Hope’s FCS Program. At that time, Patrick had a full-time job elsewhere but applied at New Hope and was hired as a DSP in the FCS Program. A year later, Patrick was promoted to the Team Leader position in FCS. When given the opportunity to lead the Vocational Services program, Patrick was especially interested since one of the individuals he served in FCS was also served in Vocational Services.

Patrick quickly gained a new perspective of the job market and the hiring, or lack thereof, for persons with disabilities. He feels strongly that being able to truly get to know the clients, their backgrounds, interests and desires is essential, as is not being limited in employment exploration. Patrick graduated from IUPUI with a degree in Communications and Film Studies which has been helpful in pursuing business connections, advocating for clients and searching for some very specific job prospects. A couple of his favorite informational meetings and tours include WFYI’s filming studio and a taxidermy company that supplies rodents as reptile food. In the upcoming weeks, he will meet with a veterinarian who specializes solely in the rehabilitation of dogs. This employment connection was developed for a client who has a physical therapy background. While Patrick certainly works hard, finding job placements for clients is fun and incredibly rewarding.

Away from work, Patrick enjoys watching professional wrestling (his favorite!) and spending time with his wife. He also has a 13-month-old daughter and a 13-year-old stepson who each keep him busy at home. Not surprising, he enjoys watching movies and annually attends the Heartland Film Festival where he interned in college. Patrick is a huge fan of Star Trek and enjoys horror films of all sorts. As an avid reader, Patrick tries to read a book a month and takes pictures each year to document what he has read.

Thank you to Patrick for making an impact in the lives of so many individuals who greatly desire to work as productive members of our community.