Posted at 17:57h in New Hope Stories, Service Spotlight, The Year of Creativity by New Hope 0 Comments
1 Like
Share 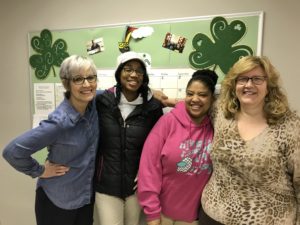 Maureen Wilson has been a resident in Indy her whole life, and she has been a dedicated employee at New Hope for the past 20 years. Having grown up in Indy, she went to North Central high school, then moved on to beauty school at the House of James in Carmel. Her start at New Hope began unexpectedly. When she was on maternity leave from working as a hairstylist at JC Penny, she became a caregiver to one of her neighbors. While she was a caregiver, she met someone from New Hope who worked for her neighbor. She realized that being a caregiver for her neighbor wouldn’t last forever, so she became interested in New Hope. After her maternity leave, she applied for a job at New Hope.

Her New Hope journey began in the Group Home program where she worked for ten years. When the Day Services Program began at New Hope’s Payne Road location, Maureen started to work there and eventually transferred to the Castleton Day Services location. Maureen is currently a Team Leader at Castleton where her role is to set an example for not only her clients but her staff as well. She strives to make everyone feel supported, and make sure the clients feel as if their hopes, dreams and any issues they have are supported as well.

The most important thing to her about her job is making small things happen for her clients so that she can help them reach goals that they think are out of their reach. Her goal is for people out in the community to see her clients the way that she sees them, and for people to realize what rewarding things they have to offer to the world.

To Maureen, New Hope has been like family to her, as it has been a big part of her life. New Hope has been an enormous support system for her these past 20 years. The Day Services Program at Castleton and New Hope are very fortunate to have Maureen’s compassion, drive, dedication and service for all this time, and we thank her for her service. Maureen Wilson is making a positive impact in not only her clients’ lives and her children’s lives, but in her community as well.