A little over twenty years ago, Kristy Abernathy-Davis was working full time at a public school with children with disabilities. At the time she also had a part time job at an agency similar to New Hope, but the hours were not conducive to her schedule. A friend mentioned New Hope, and when she came for her interview, she was really impressed. She began part time as a Direct Support Professional (DSP) and later became full time as she learned that she preferred working with adults. Kristy has worked in numerous programs and sites throughout the years, including the Supported Independent Living Program (SILP) and is currently working in the Supported Living Program (SLP) at sites including Riley, Winston I, Parker I and Burlington. She also worked for over thirteen years with two individuals, Mike and Wayne. 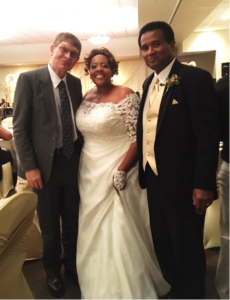 While Kristy feels New Hope is a good organization, working with the individuals she serves is what has kept her here for so long. Her positive nature is so evident in how she supports the persons she serves. She wants the individuals to be happy and enjoys making them smile. That is definitely a “two-way street” as the individuals also watch out for her. One the clients at Burlington opens the door and walks her out to her car to be sure she leaves safely. That and other caring gestures just make her heart smile.

Kristy has many wonderful memories and one story still stands out. She had taken an individual to St. Vincent Outpatient for an appointment and they were leaving. This individual was hearing impaired and had some sight issues but was aware of her surroundings. Kristy had gotten into her car and was not sure why the individual had not opened the door to climb in. She got out and saw the client was motioning to the car which had pulled up beside them and was trying to let the occupants know that they should not get out yet. They knew what she meant and were patiently waiting for her.

Kristy experienced a significant and blessed event in her life recently when she got married several months ago to Rodney Davis. Kristy shared that she waited a long time for the right one and they even share the same middle name, so their marriage was meant to be. She was so happy that one of the individuals she serves, Wayne, and his sister attended the wedding. She enjoys being with family and friends, and believes that it is important to be with people who are genuine and kind. Kristy learned very early in life the importance of the golden rule and strives to follow that in all areas of her life.

Thank you Kristy and best wishes on your new married life journey!