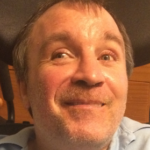 Richard grew up in Ohio. As Richard would share, he experienced troubling times during his teen years and sustained a traumatic brain injury (TBI). Seeking services, Richard moved into the NHI residential facility in 1990 and resided on the Beta unit, which served persons with TBI. When the facility began downsizing he moved to the Depaul group home and later to the 96th St. supported living home.

Several years ago, Richard had the opportunity, as a part of the New Hope Client Speaker’s Bureau, to speak to high school groups about his life in hopes that they might learn from some of his mistakes. He was proud to be able to do this and those presentations were a favorite memory. Richard had quite the sense of humor, which at times would go a bit far, especially for those who did not know and understand him. He was also faith-filled and enjoyed reading the Bible and listening to gospel music. He like watching old TV shows, such as Gunsmoke.
Richard attended the Payne Road Day Services and especially enjoyed chatting with associates.

Because of the long distance, Richard had limited contact with his family. He was however, very close to Amy Pickett, a former associate, who maintained involvement with Richard and assisted him with healthcare decisions. Richard will be missed for quirky sense of humor and strong sense of faith.