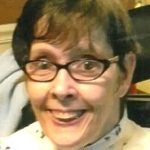 It is always so hard to say goodbye at New Hope, especially to someone we have served for over 38 years. Amy Evans Stant moved into the residential facility in 1980 where she met and married her husband, John Stant. They were the first married couple served by New Hope. When the facility was downsizing for closure, they moved out of the facility into an SLP home on 57th Street and later moved to the 60th Street home, where she was currently living. 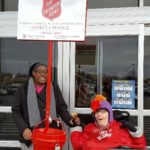 Amy did not let her physical challenges hinder being active and involved in activities she enjoyed. At New Hope, she was involved in creative writing classes, was a part of the client editorial board which worked on the New Hope newsletter, loved painting and was Vice President and President in the NHI Kiwanis Aktion Club. She attended the Payne Road Day Services and really enjoyed being with friends and chatting with associates. Amy was close to her family, who were very supportive of her throughout her life. A special memory for Amy was attending a family reunion at Lake Wawasee and being with her immediate and extended family.

Amy is greatly missed by all who knew and worked with her. 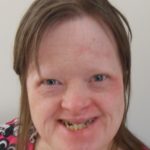 Almost from the first day Loretta Bernard started attending the Payne Road Day Services in 2014, she commanded a special presence. At least initially, associates were often met with an “I am not acknowledging you” look. 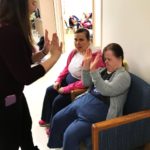 Perseverance on their part paid off in the form of a wonderful smile and if a person was lucky that day, a hug. She was especially fond of the male associates.

Loretta would often hang out in the hallway with her friend Merrie Lou, checking everyone out as they walked by, doling out some of her famous one liners to her favorite people. In recreational therapy she could be seen riding the bike and walking in the hallways to her favorite High School Musical music on an iPad. She also enjoyed being pampered such as having her nails painted or hair styled. Her love of Disney was obvious in her Mickey Mouse and other Disney character themed clothing. Loretta lived with her family, who were all very special to her.

Loretta is certainly missed at the Payne Road facility for her diva-like, yet endearing attitude. 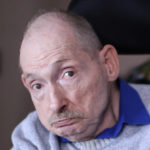 Lee Mehrlich was very active and involved in many endeavors throughout his 70 years of life. He was one of the first individuals at New Hope to receive a communication device, which utilized bliss symbols. Lee was a minister and an active member of the Zionsville Christian Church. He was also very active in the NHI Aktion Club, was an entrepreneur with several ventures including his very popular snack business and was a proud member of the NHI Board of Directors. He loved listening to gospel music and had a sweet tooth, especially for cake. Lee will be greatly missed for his advocacy, faith, devotion to his family, delightful sense of humor and so much more. 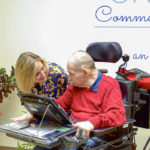 Lee was blessed with a loving family and so many who loved him at New Hope. He leaves behind a sister-in-law who is a New Hope associate and a large family of brothers, nieces and nephews, and grandnieces and nephews.

Lee is missed and lovingly remembered by all those who knew him.