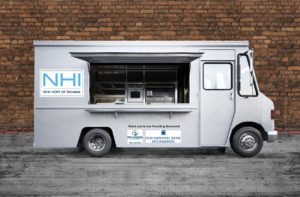 As a senior studying at IU, I first heard about Giving Tuesday after a professor encouraged me to do some research on charitable giving. I was in the middle of a semester studying and working in Washington D.C. where I felt like everyone I met had been made jaded by the city’s politics and crime. Away from the inclusive, small town community of Bloomington, I wasn’t completely convinced that my nonprofit management major would ever really pay off. But in early November a mentor of mine sent me a link to a short article titled “5 Ways Giving is Good for You” published by an online UC Berkeley magazine, Greater Good Magazine and reminded me that not everyone is as world-weary and disengaged as the people I’d been meeting in D.C. As the title implies, the article said that there are five ways that giving is good for us, whether giving of our time or of our money:

What a thought, right? Being charitable makes people feel good about themselves. Who knew?

Well, I Googled it and learned that, apparently, the founders of Giving Tuesday knew! According to their website, Giving Tuesday is “a global day of giving fueled by the power of social media and collaboration” that takes place on the Tuesday following our country’s favorite celebrations of consumerism: Black Friday and Cyber Monday. Giving Tuesday offers a feel-good way to spend some of the money you saved after days of bargain-hunting and snatching up sale prices.

This is an international movement that has grown significantly over the last five years in which thousands of organizations take part, including New Hope of Indiana, posting #GivingTuesday with urgent and enthusiastic requests for donations. This campaign gets me excited about my holiday giving and allows me to share the missions of organizations I already love and support like New Hope.

Plus, why not spend some of that money I saved when buying my Christmas gifts on Black Friday?

Now, finally using that nonprofit management degree, I am excited to be able to help promote this campaign as an associate at New Hope!

On Giving Tuesday, November 28th, New Hope of Indiana will be raising money in efforts to open a Food Truck that will employ young adults with disabilities who want to build customer service and culinary skills, the first of its kind in the country. It will serve area businesses, as well as the food deserts of our community (areas with limited access to healthy food). New Hope has already received roughly $51,000 of the $75,000 needed to get this program up and running (well…rolling) but we need more help! We want to raise at least $2,500 for the Food Truck program on Giving Tuesday.

Please help make the Food Truck a reality by donating and by liking and sharing our Giving Tuesday posts on Facebook and Twitter, using the hashtags #GivingTuesday and #NewHopeYoureHungry!