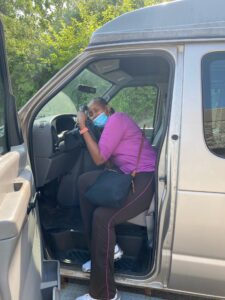 Anyone who knows New Hope’s Transportation Coordinator, Dorothy Nowlin-Love, knows how much pride she takes in maintaining our fleet of over 40 vehicles. She works tirelessly to ensure our vehicles remain safe, clean and in excellent shape, and has done so for the better part of her over-40 year career at New Hope of Indiana.

Recently, the oldest vehicle in our fleet, a 2002 Ford E-350 van equipped with a wheelchair lift and equipment to safely transport people who use wheelchairs, known as van 329, needed a minor repair. Dorothy took it to a local repair shop to have it serviced. What should have been a routine trip to the repair shop turned into a nightmare when it was discovered that, over a holiday weekend, 329 was vandalized and the catalytic converter was cut out and stolen.

Despite our vehicle being parked in the repair shop’s parking lot, we were informed that the repair shop was not liable for damage to vehicles not inside their garage.

Suddenly, a vehicle that New Hope and Dorothy have maintained for almost 20 years, was rendered unusable due to the theft of the catalytic converter. While this vehicle carried a retail “trade in value” of less than $1,000 due to it’s age, condition and mileage, it was meticulously cared for by Dorothy and the transportation department and ran very well overall. Over the course of a weekend, New Hope was now faced with a repair bill of over $2,500 to replace the catalytic converter, instead of the nominal repair previously expected. 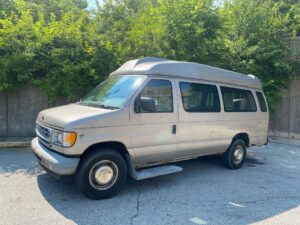 After weighing the cost of the repair against the value of the van, it was decided that 329 would have to be taken out of service. A vehicle that was so well-maintained for so many years; one that was housed at a supported living home and allowed the ladies who lived there to access their community through countless trips to run errands, appointments, outings and activities was taken away from them.

A brand new accessible van costs over $70,000. A used vehicle might be more affordable, but carries other risks that a typical used car might not have, such as age and condition of the accessible equipment and wear and tear from wheelchairs. One of many reasons that Dorothy and New Hope work so hard to take care of our fleet is that they are so difficult to replace, as they are often customized to serve the needs of the people at the site where it is housed. To find an exact, suitable replacement is about as challenging as finding a needle in a haystack.

Dorothy was understandably upset over the loss of this vehicle. What might appear as a rusty, outdated van was cared for with love and unparalleled professionalism for close to 20 years. What might seem like a simple loss of an asset is actually a loss of a tool to promote independence and inclusivity.

New Hope has had 5 other vehicles vandalized and maimed by catalytic converter thefts since 2020. While some of these vehicles were able to be repaired because of their age and value, we lost two of our next-oldest vans which otherwise would have served our maintenance team for several more years, and put a strain on the entire fleet as vehicles were repurposed to meet everyone’s needs.

You can support Dorothy’s efforts to keep our fleet safe and accessible by making a donation online or contacting New Hope’s Development Director, Jenny Pfeil, to explore other ways to support our transportation needs.