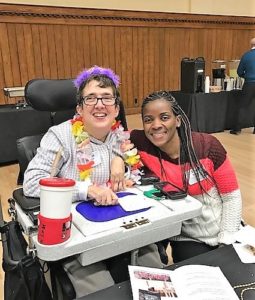 Sometimes it is hard for Linda Palmer to believe that she has been served by New Hope of Indiana for over 35 years. She moved into the residential facility in 1983 and was initially in a four bedroom on Alpha Hall. It was a tough adjustment at first as she moved from home and her family was in the Chicago area. Once Linda moved to her own bedroom, she really began figuring out her life and found a desire to be as independent as possible. In 1996, as the facility was downsizing for closure, she was excited to move to the newly built Ansar Supported Living home, where she continues to reside.

When asked about what is important in her life, Linda shared that it is her job and working. She previously worked at the Sony Theater and Sam’s Club, each for several years. For the last nearly eight years, she has worked at the Goodwill store in Speedway. She has a long list of tasks at work including organizing shoes and hats, collecting hangers and helping where needed. Linda definitely has a great work ethic!

Linda also enjoys going shopping, especially at Mays department store. She likes to eat out and go to movies and concerts. For many years she has been involved with Special Olympics and goes to the state summer games, competing in wheelchair races. Linda’s Catholic faith is also important to her. She has been involved with the SPRED program (Special Religious Education) for 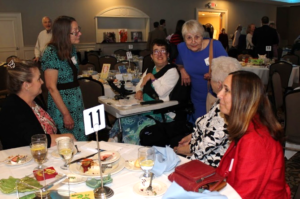 quite a few years as well. At home she likes to listen to music and watch old TV shows. She is an avid reader of mysteries, and it seems that James Patterson might be her favorite author as it appears she might have all of his books on her book shelf.

Linda enjoys seeing her family. Years ago her parents moved here from Chicago, so she sees her mom often. She sees other members of her family, who still reside in the Chicago area, on holidays and special occasions. She is also close to several Ansar associates, who have worked there for a long time.

We salute Linda for all she has achieved, including her great work ethic and years of employment, desire for independence and strong commitment to her faith.