Dan Devries’ life profoundly changed in 1978 when he was involved in an accident and sustained a traumatic brain injury, requiring a lengthy hospitalization and significant rehabilitation. However, throughout the years, Dan has not let that define his outlook on life. Prior to the accident, he was a loner, which is hard to believe for those who know him to be very social and outgoing today.

In 1988, Dan moved into the residential facility and he resided on Beta Hall, which was the designated unit for persons who had experienced a traumatic brain injury. When the facility was downsizing to be closed, he moved into a home in New Hope’s supported living program where he continues to reside. Dan has attended College Park Church for many years and feels his faith and involvement there have helped to mold and balance him as a person. 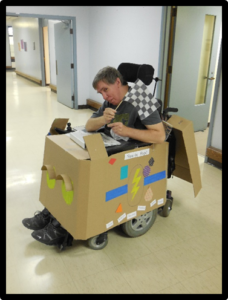 Dan attends Payne Road Day Services and is affectionately referred to as “Dan the Man” by friends and staff. He is always thinking of ideas for activities, improvements and to show appreciation. His delightful and witty sense of humor resulted in his joke of the week, posted for all to enjoy. He has suggested theme-related parties, such as an old fashioned sock hop, built his own car for Indy 500 activities and recently asked about finding a volunteer to start of model building club. He’s been involved in a garden club, keyboard class and concerts as well. Part of his day is spent visiting around the building, which has been easier for him recently with his new communication device, although he was quite fast with his letter board for a long time. He especially enjoys seeing his friend Caryl White who works in Accounting and Zeller, our facility dog. Dan also likes to shop, plant flowers around his house and occasionally go play pinball. 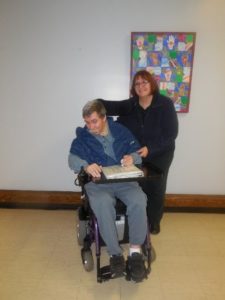 Dan maintains regular contact with his family, who live out of town. They appreciate and support his sense of humor by sending him funny cards, t-shirts and of course jokes, which he gladly shares with others. He has many great childhood memories with his family when they lived on a lake.

Our thanks to Dan for bringing some humor, creative ideas and gratitude to the New Hope community!