This month we are highlighting our final three individuals New Hope of Indiana has served for 40 years. We are so privileged to have been a part of their families throughout the years. 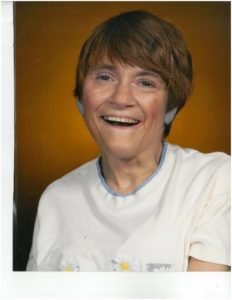 In 1978, Pam Gavin was living in a Kansas private school, far away from her family in Indiana. Pam’s father heard about New Hope and wanted her to be closer to home and family, so she moved into the residential facility. Initially, she was in a four-person room on Alpha Hall/A-Pod, but later was able to move into one of the single bedrooms. Her favorite memories from the facility are the Halloween parties, especially the infamous haunted houses, which were so scary, creative and fun.

Pam moved out of the facility and into an apartment in 1985. Over the years, she has lived in various complexes and currently lives on the northwest side, still in her own apartment of which she is quite proud. However, she does not live alone. She shares the apartment with her cat, Callie, who is her constant and beloved companion. Pam receives services through the FCS program. Pam attended IUPUI and majored in psychology. For the past twenty-six years, Pam has volunteered with St. Vincent Hospital, most recently at Peyton Manning Children’s Hospital, where she helps as a guide and entertains kids. Her volunteer work is very important to Pam and she is valued for her dedication and assistance.

Pam enjoys being outside, going to Eagle Creek for walks and camping. A fall event she participates in is the Crop Walk, a fundraiser to end hunger. She likes art and makes holiday decorations and other decor for her apartment. She also goes to movies often and reads quite a bit. Her favorite restaurants include Olive Garden and Cracker Barrel. Family is important to Pam, especially her mom, two sisters and brother.

Thank you to Pam for your determination to be independent and for being a role model for so many others. 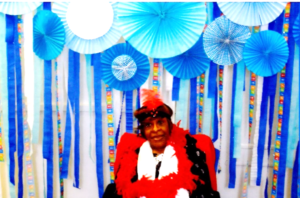 Some things never change, and Terri Hopson’s love of all things red was obvious soon after she moved into the residential facility on D-Pod/Delta Hall. While Terri enjoyed socializing, especially with staff, she was happy to move to the Demarillac Group Home in 1995. After sharing a bedroom with others for so many years, having her own room was special and, not surprisingly, it was painted red and later bright pink (another favorite color). Two years ago, Terri moved to the Rosalie Group Home and said she was excited to live in a “mansion.” 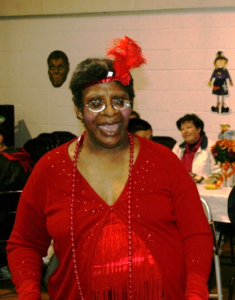 Terri is a gifted artist and for many years was a part of the Noble Therapeutic Art Program in which she won several awards. For the last several years, Terri has been attending the Payne Road Day Services. She enjoys drawing and listening to oldies music, particularly the Jackson Five. She really likes to go out to eat at “BK Burger King” and also loves sweets, especially vanilla shakes. She loves to shop, wanting to be sure she has an ample supply of beautiful red and other bright dresses and skirts. Terri appreciates women’s hair and will often comment to others about their “silky soft hair.” She is quite proud of her own hair, which is growing out. Terri looks forward to spending time with her two sisters, Rhonda and Lisa, for the holidays and special occasions.

Thank you to Terri for brightening our New Hope world with your effervescent presence! 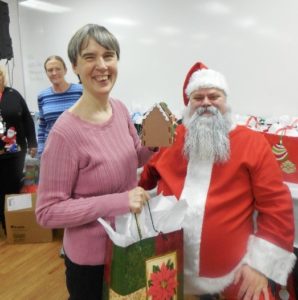 When Peggy Bland moved into the residential facility on D-Pod/Delta Hall in 1978, there was not a lot of information about serving individuals with autism. Despite her lack of verbal communication, Peggy has been able to communicate her wants and needs quite well over the years. While living in the facility, Peggy always attended activities and was very aware of what was going on; however, she preferred to observe rather than directly participate. In 1994, Peggy moved to the Frederic Group Home where she continues to reside, and that much smaller, homier environment has enhanced Peggy’s comfort level and desire to be more involved. 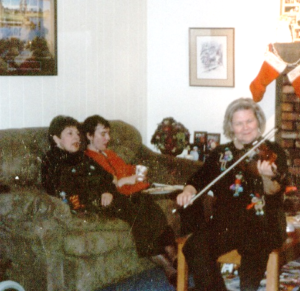 Peggy attends Castleton Day Services and enjoys music, crafts and having her nails done. In her home, she listens to music of all kinds and likes to be involved in activities with her housemates. She also likes to go shopping, especially to pick out her clothes. Peggy sees her family around special occasions and enjoys spending time with them.

We appreciate Peggy’s unique personality and how much she has taught us throughout the years.