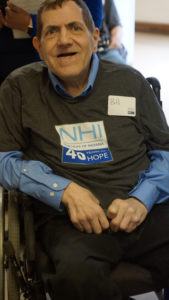 When Bill Samaras moved from his family’s home into the New Hope residential facility in September of 1978, he told his brother that was his birthday present, to be free of his younger brother bugging him all of the time. Of course, Bill was just kidding, but that delightful sense of humor is still very apparent in Bill as he likes to joke around. Bill lived on A-Pod, later called Alpha Hall. He has a lot of great memories, especially of socializing with his many friends. When the facility began downsizing, Bill moved out with his then wife, to one of New Hope’s homes on 57th Street. In 2003, Bill moved to the Supported Living home on Washington Boulevard where he continues to reside.

One of Bill’s passions is art and he has been involved with the Indianapolis Art Center for many years. His favorite medium is ceramics and he is truly gifted at sculpting animals. Other things Bill enjoys include emailing friends, playing games and streaming movies on his computer.

Several years ago, Bill was asked by previous CEO, Jim Van Dyke, to become a member of the New Hope Board of Directors. Bill is quite proud to have been a board member and his input from the perspective of someone served by NHI, was very valued and needed. His time on the board is greatly appreciated.

Bill was recently recognized at New Hope’s 40th Birthday Party as one of New Hope’s Class of 1978!