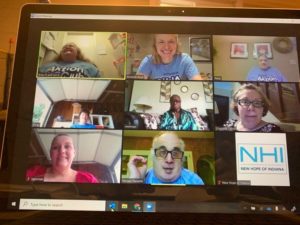 While service projects in the time of COVID have been difficult to safely organize, New Hope’s Aktion Club has continued to find meaningful ways to give back to the community. Kiwanis Aktion Clubs are important opportunities for adults with disabilities to gain leadership skills and practice community-based philanthropy and service. Our Aktion Club typically enjoys organizing bake sales, food drives and other small fundraisers to support local nonprofits. They also enjoy volunteering for organizations like Meals on Wheels. In the midst of the pandemic, however, these typical activities were no longer safe. Rather than giving up the things they are passionate about, New Hope’s Aktion Club members are finding unique and meaningful ways to support the Indianapolis community. 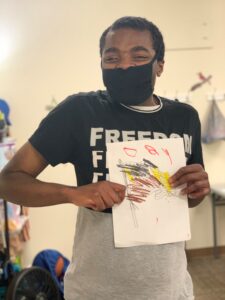 This spring, Aktion Club led the efforts to create and collect greeting cards for Mother’s Day and Father’s Day, donating each to local organizations supporting parents. Because the club hasn’t had many expenses, they were also able to make a generous donation to each organization to celebrate the families they serve. This summer, they have plans to honor veterans, create a garden to grow produce which can be donated to those in need and resume some of their usual volunteer activities.

Even in a time of disconnect and uncertainty, Aktion Club members have continued to put others first and find ways to make the most of their time and resources. New Hope’s Aktion Club is open to any individual served by New Hope who is interested in working as a team, giving back to their community and being a leader among their peers. Learn more about Kiwanis Aktion Clubs here.