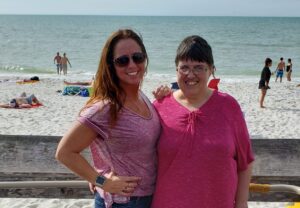 Family has always been important to Christy Bowser. She has a picture of her mom, who has been gone for 20 years, next to her bed. She worries about her aging dad, who lives in Florida with her sister Michelle. While her mom and dad are important to her, it’s her sister Michelle with whom she is the closest. Christy lights up when she talks about Michelle, who has made it a priority to ensure for Christy’s health and well-being.

Long before the term “autism” was widely used, Christy was diagnosed with a mild intellectual disability as a child. Christy describes herself as a social butterfly who loves to read (anything but lovey-dovey stories), enjoys gospel music and going out to do activities like bowling. She’s always willing to try something new and is a genuinely happy person.

Christy is also fiercely independent – wanting to live on her own and have a job she enjoys – which she did for over 20 years at Marsh Supermarkets. However, a few years ago, Marsh closed, and Christy lost her job. She began experiencing health and other challenges which were hard for her sister Michelle to help with, living so far away in Florida. Michelle worried about Christy constantly and relied on friends to check in on her and help with small tasks. It was hard not knowing if Christy was OK.

Michelle knew she needed help ensuring that Christy was safe and well-cared for – especially as Christy had health concerns that needed attention. So she started looking for options. Michelle found New Hope of Indiana and now says it was life-changing for her entire family.

Initially, Michelle wasn’t sure about Christy living in a group home. “I thought it would be like a nursing home or a medical facility. But it’s not. It’s really just a house with roommates. I didn’t realize she would have as much freedom as she has.”

Michelle says both her and Christy’s lives have changed for the better since Christy moved into her New Hope home. Christy has become even more social, found a best friend Donna, dramatically improved her health, and is thriving. But what means the most to Michelle is that she can now have a normal relationship with her sister. “Before, when Christy was living on her own, I was always asking her about paying bills and telling her what to do. Now, we have actual sister conversations. It’s strengthened our friendship and our sisterhood. I believe that New Hope saved Christy and I’m so glad she is there”.

Christy, and her family, are thriving since she moved into a New Hope home. New Hope is so much more than an organization that cares for individuals with disabilities. It’s one big family and we are grateful for the opportunity to help those who are part of our family thrive.

You can support families like Christy’s by making a donation to New Hope of Indiana today.